Is Your Company’s Equity Program a Glass Ceiling?

Tell me where stock options are and I’ll tell you where the glass ceiling is.

I heard this in a New York Times podcast about, of all things, football (“The Rule at the Center of the NFL Discrimination Lawsuit”). I almost didn’t listen to it because I am not at all interested in football. But I figured it would give me one more thing to be annoyed at the NFL about (a hobby of mine, apologies to those of you who like football), so why not?

About six minutes into the podcast, Ken Belson, the journalist being interviewed, is giving the history of the Rooney Rule, which requires NFL owners to interview candidates of color for head coaching positions.  In particular the journalist is sharing the story of Cyrus Mehri, who is one of the lawyers who proposed the Rooney rule.

The podcast is interspersed with audio from an interview that Belson recorded with Mehri. In one audio snippet, Mehri is talking about discrimination lawsuits in which he won significant settlements from Texaco and Coca-Cola when he makes the above statement about the glass ceiling and stock options. The context is that Mehri is meeting with attorneys in Atlanta who want to pursue a lawsuit against Coca-Cola. Here is the full quote:

I walked around the room [at the law office] and talked to everybody, and I heard a very similar story at Coke that I heard at Texaco — the frustration of very impressive African-American executives, managers who hit the glass ceiling. And when I started the meeting, at one point, I said, tell me where stock options are and I’ll tell you where the glass ceiling is. Where that pay grade where wealth is created is where African-Americans are being locked out.

Mehri was able to use data on stock options, promotions, and salaries to prove that Blacks were being discriminated against and win a settlement from Coca-Cola. At which point he turned his attention to the NFL. The podcast goes on to discuss the Rooney Rule and the current discrimination suit, but I was stuck on the idea of stock options demarcating the glass ceiling.

The Texaco and Coca-Cola lawsuits that Mehri discusses were settled in the 90s, hence his reference to stock options. These days, executives are more likely to receive full value awards. I would like to think that just as companies have moved away from stock options, they’ve also eliminated their glass ceilings. But, two decades later, this doesn’t seem to be the case.

According to the Washington Post, only 8% of C-suite executives at the 50 most valuable public companies are Black. At least eight of the 50 companies have no Black executives. (Blacks comprise 12% of the US population.)

According to data from Equilar, as reported by NPR, nearly 30% of S&P 500 companies do not have a Black board member. Fortune reports that less than 1% of all companies in the United States have a Black leader. In the entire history of the Fortune 500, only 18 companies have had a Black CEO.

Not Everyone Receives Equity

Most companies, especially those outside of the technology sector, limit discretionary equity awards to higher paid employees, although the criteria for eligibility in equity programs varies by company.

As highlighted in our feature article in the Fall 2021 issue of The NASPP Advisor, the 2021 Equity Incentives Design Survey, cosponsored by the NASPP and Deloitte Consulting, reveals the employee ranks at which companies grant discretionary equity awards. The chart below illustrates the percentage of companies for which the employee rank indicated is the lowest rank at which discretionary equity is granted. 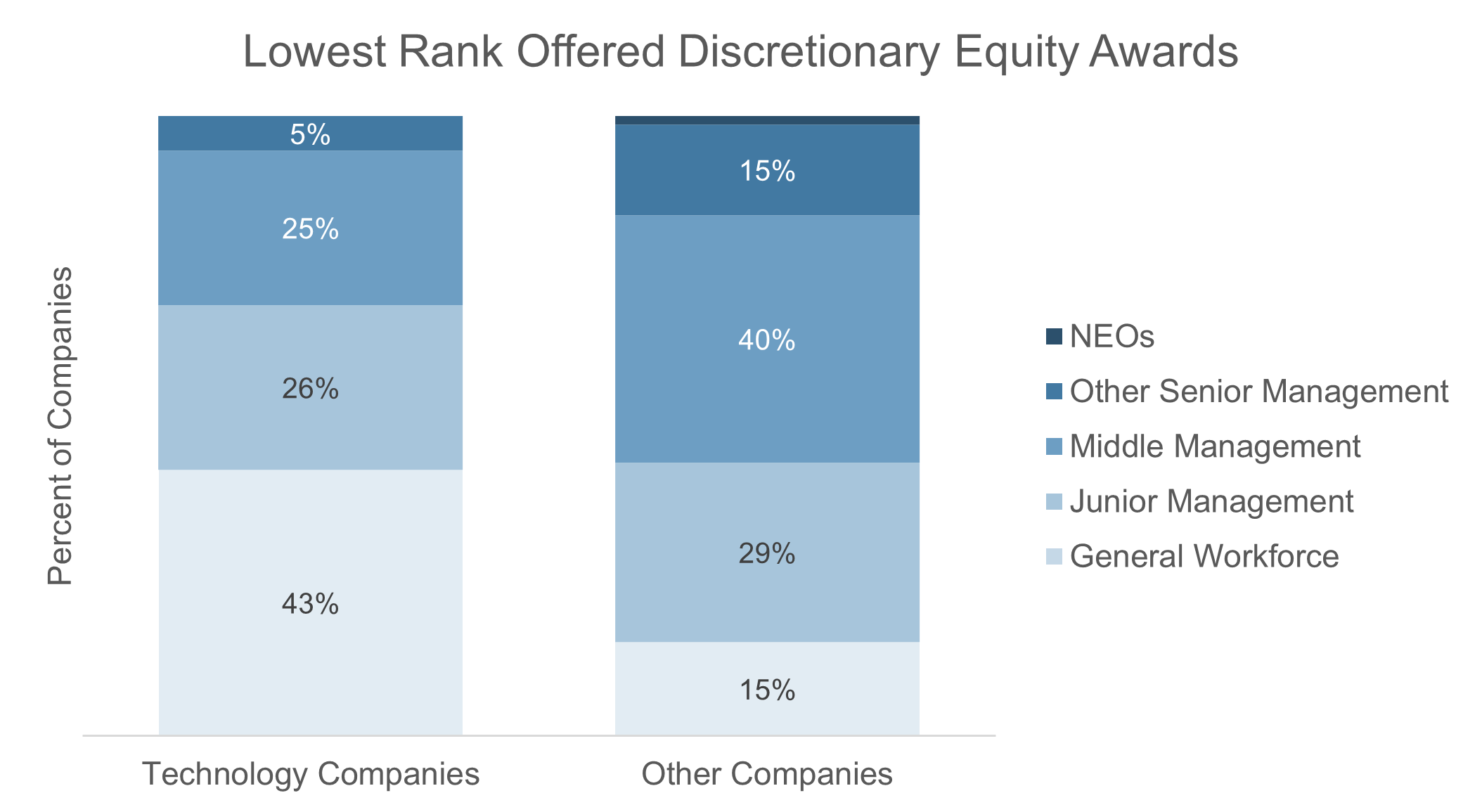 For those companies that issue equity awards only to employees above a specified rank, the population that receives equity awards reflects which employees are able to advance within the organization. Material differences in the racial or gender composition of this population as compared to the company’s overall employee population may be a red flag that some groups of employees are not afforded the same opportunities for advancement.

If your internal pay equity analysis is limited to comparing the equity awards employees receive against those of their peers of the same rank, larger systemic deficiencies may be overlooked. Below are some suggestions of how to evaluate equity award data to identify trends in who is advancing within your organization.

Don’t Forget About Your ESPP

If you offer an ESPP, it’s also worth taking a look at the demographics of ESPP participants as compared to the population of employees who are eligible to participate in the plan. Differences in these populations may point to barriers to participation that could be addressed through changes in the design of the plan. My video “Let’s Talk about Equity Rights, Equality, and ESPPs” discusses this in more detail.