When companies go public, they often want to implement an ESPP at the same time. This is more complicated than you might think.

Why Implement an ESPP at the same time the company is going public?

You might think a company would have enough on its plate with an IPO, why add implementation of an ESPP into the mix? The advantage of implementing an ESPP at the time of an IPO is to lock in the IPO price (i.e., the price the underwriters pay, not the closing price on the IPO date) for the duration of the first offering in the plan. If the newly public company’s stock price continues to appreciate, this is a compelling benefit for employees (especially if the offering is, say, 12 to 24 months in length).

What’s So Complicated About It?

The securities law treatment is the complicated part. The SEC considers an employee’s decision to enroll in an ESPP to be an investment decision, thus the plan must either be registered or the offer and sale of securities under the plan must be exempt from registration before employees enroll in the plan.

Publicly held companies generally file a Form S-8 to register their stock plans, including ESPPs. But Form S-8 relies on information in the company’s other public filings, so it can’t be filed until after the company has completed the public filings associated with its IPO.

The SEC has said that, where companies will be relying on Form S-8 to register the plan, rather than exempting the plan from registration, the Form S-8 has to be filed before the company can begin communicating about the plan to employees. The result of this is that companies can’t promote the ESPP to employees or begin collecting enrollments from them until a Form S-8 is filed for the plan, some time after the IPO. But, for tax purposes, employees have to be enrolled by the IPO date to lock in the IPO price.

Can’t the Company Just Exempt the Plan Under Rule 701?

Theoretically, yes, the company could rely on Rule 701 to implement the plan before the IPO, but there are practical challenges to this approach. The biggest challenge is that shares acquired in reliance on Rule 701 aren’t as easily sold as shares that are registered. This creates additional hurdles that must be overcome before the shares can be sold.

For nonaffiliates, these hurdles are largely administrative—they wouldn’t prevent nonaffiliates from selling—but they are cumbersome, especially when they have to be addressed for a large number of employees, as would be the case for an ESPP. Generally public companies want to register their ESPPs so that the shares acquired under them are truly freely tradable for nonaffiliates (and can be more easily sold by affiliates too).

When companies rely on Rule 701 to grant stock options, they typically register any outstanding options on Form S-8 after the IPO. They can do this because the investment decision for a stock option doesn’t occur until the option is exercised and companies have until that date to file a Form S-8 for the plan. This won’t work for employees who enroll in an ESPP offering while the company is private because the investment decision will have been made before the Form S-8 could be filed.

Automatic Enrollment to the Rescue

The SEC has indicated that if employees are automatically enrolled in an ESPP, the investment decision is delayed until the employee decides to either stay enrolled in the plan or withdraw from it. So the solution is for companies to automatically enroll all employees in the offering that starts on the IPO date, file the Form S-8 as soon as reasonably possible after the IPO (once filed, Form S-8 is immediately effective), and then promote the plan to employees, giving them a short period in which to decide to stay in the plan or withdraw from it (or make changes to their contribution rate).

But this solution also has its challenges. Most significantly, many countries and US states limit the purposes for which companies can deduct funds from employee paychecks without their consent. Under these laws, companies often must obtain employee consent to deduct ESPP contributions. Thus, the Form S-8 must be filed and employees must be given an opportunity to confirm their enrollment or withdraw from the plan before contributions can begin. If employees don’t actively confirm their enrollment, they are usually automatically withdrawn from the plan.

This process puts a lot of pressure on employees in newly public companies to make a quick decision about participating in the ESPP. In our comment letter on the SEC’s proposed updates to Rule 701 and Form S-8, we point out that the process that has evolved as a result of the SEC’s position on ESPPs implemented at the time of an IPO is not ideal for employees.

Are There Accounting Implications?

Yep, you bet. The grant date for accounting purposes may be delayed until employees confirm their enrollment. If the start of the offering (i.e., the IPO date) is considered the grant date, increases in employee contributions are treated as modifications and the company continues to recognize expense at the auto-enrolled rate for employees that withdraw or decrease their contribution rate.

In the case of a SPAC, this process is further complicated by the fact that, as I noted in my prior blog on SPACs, Form S-8 isn’t available to shell companies and, as a result, the newly public company resulting from the SPAC isn’t able to register the plan on Form S-8 until around 60 days after the acquisition closes.

I thought this meant that SPACs would not be able to implement an ESPP in connection with a SPAC, but Liz Stoudt of Infinite Equity tells me that they are able to do it, they just have to push everything 60 days down the road. The initial offering still begins on the de-SPACing event, but the plan isn’t promoted to employees and no contributions begin until a little over two months later. Because a picture tells a thousand words, here is a timeline Liz put together for me illustrating how the process works for a SPAC. 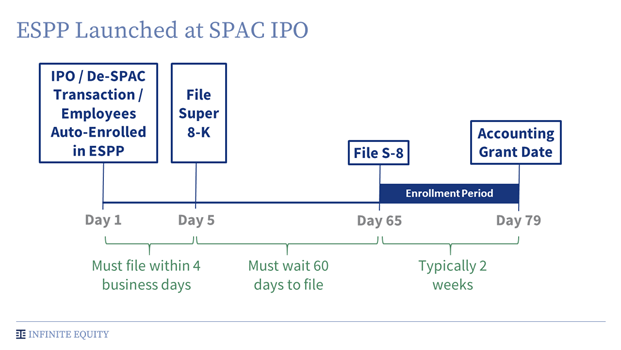