Last week I blogged about what transactions still must be reported for former Section 16 officers and directors. To help you remember the rules, I’ve created a table that you can cut out and tape up on your wall next to your desk, because I’m sure you’re going to want to keep this info handy. And I have a few more follow-up questions to address this week. 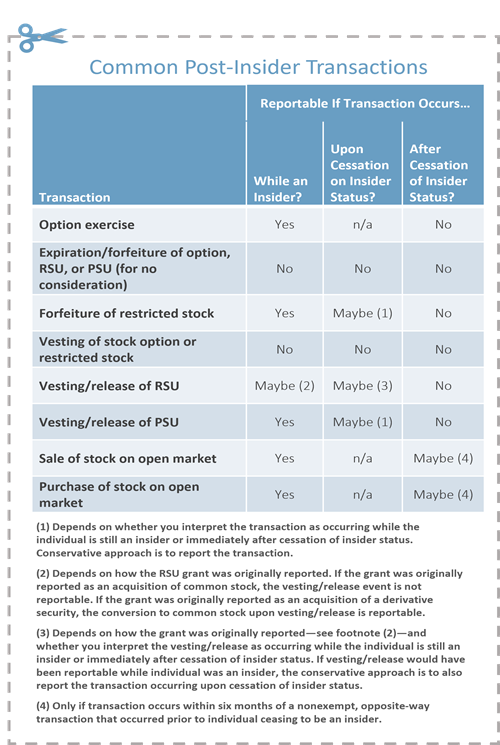 Are There Any Other Transactions to Worry About?

Yes, if the former insider engaged in any transactions prior to ceasing to be subject to Section 16 that weren’t reported (e.g., Form 5 reportable transactions or delinquent transactions), those transactions still must be reported. It’s probably best to voluntarily report these transactions at the time the individual’s insider status ends; it’s easy to forget about them by the time the end of the year rolls around.

Do Any Special Procedures Apply to Post-Insider Filings?

Yes, if submitting a Form 4 or 5 for someone who is no longer subject to Section 16, select the checkbox labeled “Check this box if no longer subject to Section 16. Form 4 or Form 5 obligations may continue. See Instruction 1(b).” That is an absurdly long label, so this checkbox is commonly referred to as the “Exit box”; it appears just under the form heading in the upper left corner of the print version of the form. 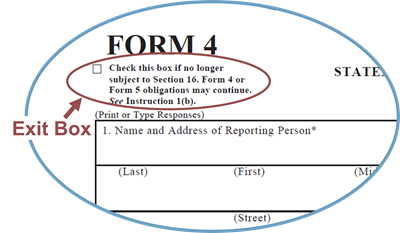 Do Insiders Have to Notify the SEC that They Are No Longer Subject to Section 16?

No, the SEC does not require notification of cessation of Section 16 status. But insiders can voluntarily file a blank Form 4 with the Exit box selected if this makes them feel better.

10% owners aren’t subject to any post-insider reporting, regardless of the exempt status of their transactions. But note that if the reason they are no longer a 10% owner is because they sold some of their stock holdings, that last sale that dropped their ownership below 10% is still reportable (and is still subject to the short-swing profits recovery provisions).

What About Affiliate Status Under Rule 144? When Does that End?

Rule 144 is a whole different kettle of fish. Here there isn’t a bright-line test like there is under Section 16. Whether someone remains an affiliate after terminating their service relationship with the company is a facts and circumstances determination.

In addition, under Rule 144(b)(2), former affiliates remain subject to Rule 144 for 90 days after ceasing affiliate status. This has no bearing on whether their transactions are reportable under Section 16, however.

What Administrative Procedures Should Companies Have in Place for Former Insiders?

Where companies file Section 16 reports on behalf of officers and directors, I recommend the following procedures when an officer or director ceases to be subject to Section 16:

If the former insider has no nonexempt transactions during the six months prior to cessation of insider status, no post-insider transactions will be reportable.

Verify that all the former insider’s pre-cessation transactions have been reported. Report any unreported transactions.

3. No Filings Due Statement

Once you determine that the former insider has no further transactions to report, obtain a “no filings due” statement so that you don’t have to worry about collecting this at the end of the year.

Keep the former insider on your Section 16 year-end review checklist so that if the insider has any outstanding items that need to be addressed at year-end (e.g., a delinquency that must be included in the company’s Item 405 disclosure), you don’t forget about them.