A Guide to the SEC’s New Pay-for-Performance Disclosures

The SEC’s long-awaited amendments to Item 402 of Regulation S-K (i.e. the pay for performance rules) were released in late August. These new rules require companies to include tabular disclosures in their proxy statements that compare the compensation paid to executives to the company’s financial performance and identify the company’s most important performance measures.

I characterize the new rules as “long-awaited” since they’ve come after an initial commentary period in 2015, followed by another comment period in early 2022, to ultimately arrive now. The final rules have changed substantively between the proposals in 2015 and 2022.

I’m a strong proponent that the final rules will improve the transparency of executive compensation, and that these rules are a positive development for our community— ultimately providing for more flexible disclosures that allow companies to describe the performance it deems most important when determining what it pays executives.

The new rules are effective for proxy statements that include executive compensation disclosures for fiscal years ending on or after December 16, 2022, so the timeline for implementation is quite compressed. With that in mind, I want to summarize the critical concepts and changes to be aware of. I’ve separated them into three distinct sections to keep things simple.

The definition of “compensation actually paid” starts with the disclosed compensation from the Summary Compensation Table but is adjusted for pension benefits, above market earnings of deferred compensation,  and employee equity awards (our beloved).

Since this is the NASPP, I’m going to skip directly to equity awards and ignore the other adjustments. To calculate the adjustment for equity awards, first subtract out the grant date fair value (based on audited ASC 718 results) as reported in the Summary Comp Table, then add any incremental gain from equity compensation for the fiscal year for the following three categories of equity awards:

As noted above, the disclosures will include CEO (or PEO) compensation and average compensation for the remaining named executive officers. Further, if there was a transition to a new CEO during the year, separate disclosures for the former CEO should also be included.

The data for the three categories above (vested, outstanding and unvested, and dividend equivalents) should be straightforward downloads from your equity administration system. Although processes to automate these calculations are not yet available, I’m guessing the algorithms will be developed.

Any modifications of equity awards (repricings, changes to performance goals, etc.) occurring during the applicable fiscal year will be captured in the incremental difference between the end and beginning of year fair values.

The fair value of awards must be computed in a manner consistent with your financial statements and GAAP, therefore a similar process should be used as applied for your other grant date valuations under ASC 718. You should also calculate volatility with a consistent process and continue to consider holding restrictions after vesting.

For example, assume a company with a calendar year fiscal year has granted relative TSR awards every year in March since 2018. The awards have a three-year performance period. This company will likely need eight new Monte Carlo simulations:

The 12/31/2019, 12/31/2020, and 12/31/2021 valuations can be completed now; the 12/31/2022 valuations will need to be done at that time. External valuation vendors are going to be stretched, and I would reach out to them now for guidance. Subsequent years will not be as onerous. On an ongoing basis, the company in our example will only need new Monte Carlo simulations as of the end of the fiscal year for the two outstanding plans.

For any equity awards tied to performance conditions, calculate their fair value at the end of the fiscal year based on the most probable outcome (which should be similar to the assessment already being done for expense accrual purposes).

The following table describes some of the considerations for determining the fair value of different types of equity awards: 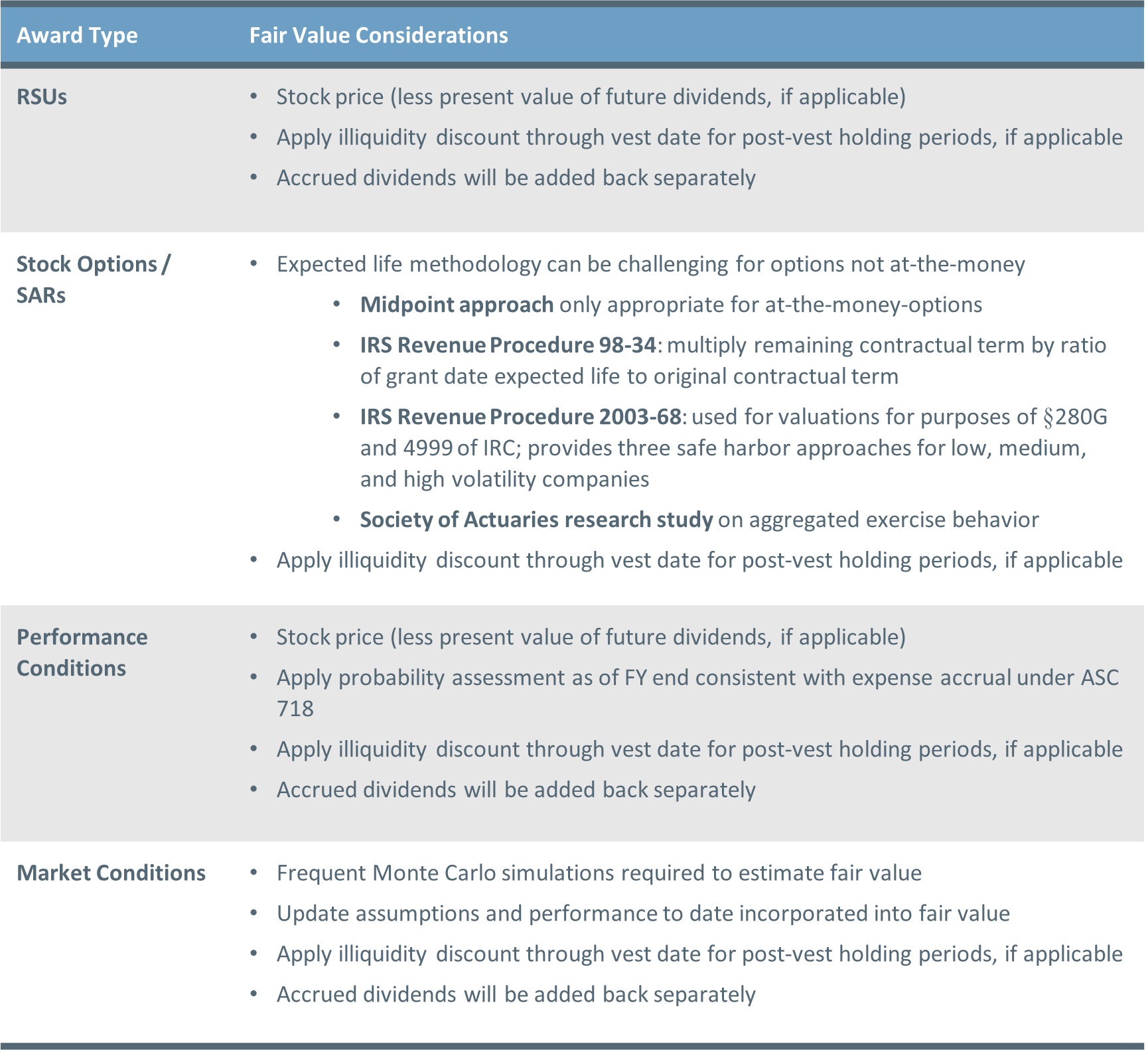 At first blush, this can feel like an overwhelming amount of work. I recommend generating two downloadable exports from your equity administrative system: (1) a report of outstanding and unvested awards as of the end of the last fiscal year, and (2) a report of awards that vested during the same fiscal year. Below are examples of how these reports might look: 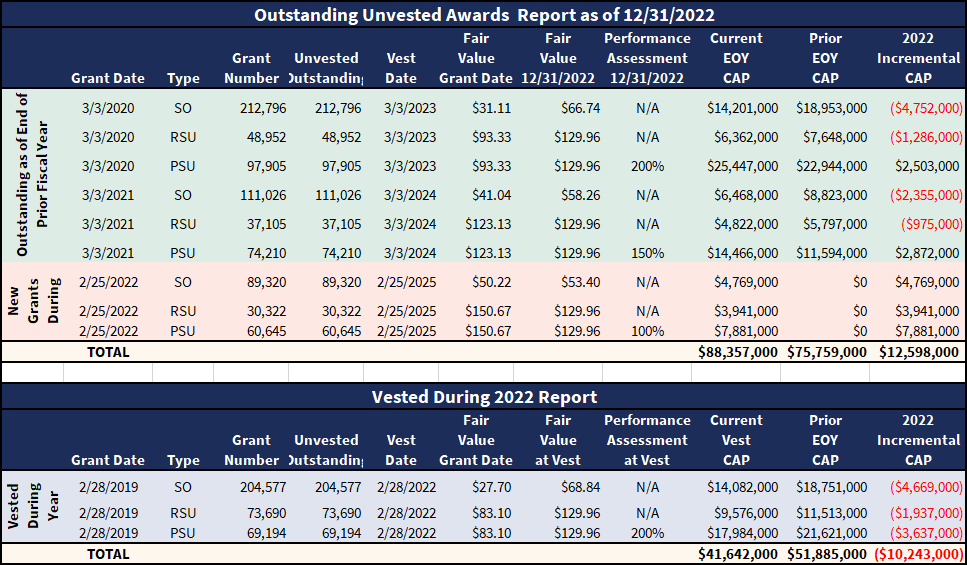 As burdensome as it may seem, I believe that this approach for calculating the fair value of equity is appropriate. Companies who grant significant equity should be strongly aligned with TSR, since the re-valuation of outstanding equity will incrementally increase with growth in your stock price. If the result does not show strong pay for performance alignment, it is likely not enough equity is granted, or alternatively performance goals are not being set with rigor.

The new rules require the disclosure of a minimum of three to a maximum of seven “most important” performance measures, as determined by the value attributed in the Compensation Actually Paid column. The most important performance measures can be financial measures (e.g., operational or market conditions) as well as non-financial measures (e.g., ESG goals).

For purposes of this paragraph (v) of this section, “financial performance measures” means measures that are determined and presented in accordance with the accounting principles used in preparing the issuer’s financial statements, any measures that are derived wholly or in part from such measures, and stock price and total shareholder return.

One of the interesting tidbits to me on this regard is that time-based stock options are deemed financial performance measures by this definition. I’ve been clamoring for years that stock options are performance-based, so I’m happy to see the SEC recognize them as such as well.

Interestingly, there is no requirement to rank or order your three to seven most important measures, which surprises me as I feel it would have been quite easy to do so when you determine your compensation actually paid.

Section 3: TSR & Other Measures of Performance

The following three performance measures must be included in the table comparing executive pay to company performance:

The initial adoption of these rules requires three years of historical performance as a transition. However, it will ultimately increase to five years of total performance.

Net income was chosen to help illustrate an interesting contrast against TSR, which I agree with.

All in all, the new rules facilitate greater transparency and even feature some interesting new classifications (for example: time-based stock options now being deemed financial performance measures). While the window to comply with the new regulations is short, I’m excited about the improved information and insight they will make available to shareholders.

While performance-based equity has historically been linked to executives and senior management, we know that these incentives should be adopted more broadly. Infinite Equity continues to examine the new Pay-for-Performance rules and how they will impact both the executive and equity compensation community. I hope you enjoyed my summary!

Terry Adamson (aka Mr. Relative TSR) has advised thousands of public and private companies with regard to equity design, valuation, accounting, and share management.

Terry was formerly on the FASB Round Table on Employee Share Options and on the Executive Advisory Committee of the NASPP.   Terry currently serves on the Advisory Board of the CEP and is the Chairperson of the Society of Actuaries taskforce on stock option valuation.

Terry is a frequent author and speaker regarding equity compensation and is known as one of the premiere experts on performance equity. Follow Terry for more information on the new rules or insight into the industry.